Before the East Coast was hit with Nor’ Eastern Quinn, we got a little preview storm on  March 2nd and 3rd, but that didn’t stop Mike Herrera and Joe Sib’s two night residence at UPenn’s Iron Gate Theatre.  A seated intimate venue, this two night residency was an unique experience for all who attended.  Joe Sib opened the night with a 25 minute stand up comedy.  Joe Sib came into the music scene around the early 90’s as he fronted his band Wax and from there 22 Jacks.  Most recently you might know him as the co-owner of Side One Dummy Records, who put out amazing releases from Gaslight Anthem, Flogging Molly, Anti-Flag, MxPx, Slick Shoes, Mighty Mighty Bosstones, and the list goes on.  You might say he knows a thing or two about the industry, and with that knowledge comes a lot of stories.  Even though Joe Sib’s comedy features stories about the music industry, which anyone can enjoy, he also tackles the current state of his life, an aging punk with a family.  Something a lot of his fans and others can relate too.  Joe’s comedy is unique because of his experiences, not many comedians can say they almost signed Social Distortion or wanting to crash their daughter’s party because it wasn’t crazy enough.  Having a comedian open a show was refreshing for a change, even though Joe said his previous efforts of opening rock shows didn’t go over well, the crowd on night 2 embraced his comedic charm.

Mike Herrera of MxPx has been doing acoustic shows for years, but these shows offer a little bit more.  In between songs, Mike would tell stories and interact with the crowd.  Not to say he didn’t do this before, but there was more of an emphasis on story telling.  The stories he would tell about a song or an past experience in Philadelphia are stories he never shared before let it be live or on his podcast.  Which gave the fans a little peak behind the current.  When it came to the songs, Mike played everything from MxPx to Tumbledown to a cover to even an unreleased solo song that he promises will get recorded one day.  Even though it was an acoustic set, Mike still asked for some people to come down and start a “pit” during “Tomorrow’s Another Day” which included a young MxPx fan and his mom.  The kids would again make an appearance during “Responsibility” and sing back up vocals for Mike.  A lot of surprises happened during the show and Mike embraced each occurrence 100%.  You don’t know what you will get at these acoustic shows.  MxPx shows don’t leave a lot of room to allow the guys to talk and tell stories, but for these acoustic shows, fans are getting an inside look at the band’s extensive history which needs to be told.  I think an MxPx book is in order. 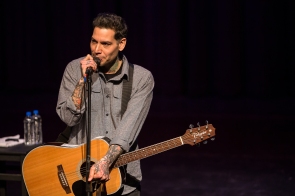 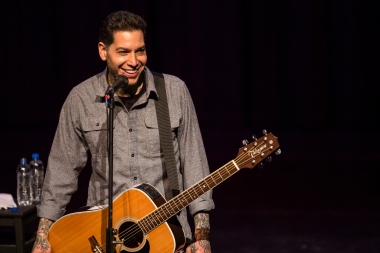