For about a year, Koji was on a hiatus from performing music live, but for 2017 he decided to play a few shows throughout the year and ended the year with a couple holiday shows.  Having been a road dog for a long time, coupled with life and everything going on in the world a break from the road was needed for Koji.  Even though he hasn’t been as active as before, for the holiday Philadelphia show it was the same old Koji.  He urged the audience to gather around him and sing along in which the crowd didn’t hesitate and sang perfectly.  Singing for just about a half an hour, due to the venue being colder inside than it was outside, Koji went through his most popular songs and covers.  In between songs Koji spoke to the crowd about how we can make the planet a better place and his woes with the music industry, a tough subject to get through, but through it all he still performed with a smile.  Koji didn’t elaborate on what the future holds for his musical endeavors, but he did say next time it won’t be as cold.  Where or when that will be in up for interpretation, but hopefully it will be sooner than later. 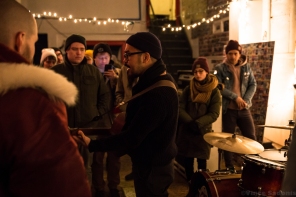