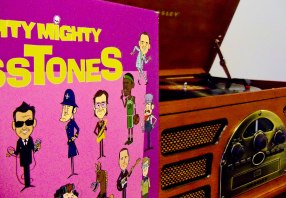 Before jumping into this album, I should first explain my reasoning of this site.  Music has always been a huge part of my life, which you will find out shortly.  All my life I shopped at my local record stores and purchased countless of music with the little bit of money I had.  Yes, I purchase music, I know in this day in age it sounds absurd, but I am a firm believer in supporting the musicians that inspire me in every way.

My sections on “sounds” will focus only on vinyl records I have.  This is to comment not only how I interpret the album and what it means to me, but what the vinyl color, shape, or weight is.  In return I hope there are some interested people out there that want to know what I have to say, and hopefully that leads into you purchasing some new music.

I should note I am not the greatest writer, nor photographer, but more on that later.  Now onto the album!

For my first post, I thought it would be fitting to post this album in conjunction of seeing them tonight at The Trocadero in Philadelphia, PA.

What is there to say about the Mighty Mighty Bosstones?  In the ska scene and their home state of Boston, these musicians are considered legends.  Having a huge hit in 1997 called “The Impression I Get”, no the title isn’t “Knock On Wood”, and this band started the 90’s ska craze.  Most people loved it and others…well…to this day still hated that era.

I first heard of their music through my sister’s bedroom walls.  I am not going to lie; I didn’t listen to the Bosstones back catalog, let alone know they had one at that age.  As soon as music became a huge part of me, I made sure I purchased everything they performed.  After the album Let’s Face It, the Bosstones would release Pay Attention.  Either it was the dying of the ska scene or people just didn’t like the album, which I did and will write about later, the Bosstones started losing their momentum and would soon retire.

After a demand for a reunion, a B-side album, a new album, and then another album rightfully titled The Magic Of Youth, the Bosstones are back and doing everything on their terms.  Dicky Barrett has gone on to say in countless of interviews that this album is the best material they have written.  The title of the album explains exactly what they were going for.  Making an album that is energetic, fun, and care-free just like when we were all young.

The opening song “The Daylights’” chorus starts the album off just how the mentality of a kid is:

Not to mention the opening bass line makes your head start moving almost instantly.  The album doesn’t slow down either, each song rings out with up stroke guitar strums and the horn section is very prominent.  One can say almost louder than the guitar and drums.

There are songs on this album that do have good story telling like “Sunday Afternoon On Wisdom Ave” and “The Ballad Of Candlepin Paul”.  I am a big fan of storytelling lyrics that help you paint a picture in your mind, and listening to these songs, I just think back to walking the streets of Boston.  The rest of the lyrics on the album, like “They Will Need Music”, are what you’d expect of a ska band.  Uplifting, positivity, and sing a longs.  Even Jon Pebsworth, of ska band Buck O Nine, gets in on the action with singing backing vocals.

The Bosstones aren’t inventing anything new on this album, but do use pianos more and drumming that sounds like the Flintstones’ feet moving while they drive on “Sunday Afternoon On Wisdom Ave.”  I can say though, they are keeping the spirit and fun of ska alive on this album.  For anyone complaining they can’t find a true ska record by the bands they used to listen to, I say look no further.  The Bosstones pulled through and this album should not be overlooked.

I originally had this album on compact disc before the street date, thank you Vintage Vinyl in Fords, NJ!  It wasn’t until I bought the vinyl on Record Store Day 2012 at the West Goshen Book & Music Store in West Goshen, PA.  The packaging is good with it being a gatefold.   I personally enjoy the purple they used on the cover, and the cartoon artwork.  Just looking at the appearance, you know this is a fun album.  Unfortunately, there is no download card and the record itself is just black.  I was hoping for a purple colored vinyl, but the bonus song made up for that.  I like when bands use that incentive to buy the record.  The vinyl includes the song “I Should Have Said Something”, and it is not meant to be missed.  It fits perfectly on the album and touches on the love of youth.